At my amazing campsite right on the water, with an unreasonable amount of stars in the darkness of the new moon, I fell asleep last night worrying that the tide would sweep my tent into the sea. Tides here are remarkably variant; at the new and full moon, when tides are craziest, the tidal range is 7.5 m (24 feet)! We arrived on the new moon; aligned since I asked for my leave of absence from work on a new moon, left Alberta for the trip on a full moon, and now begin this kayak adventure on a new moon. Cycles abound.

We wake at 7am and take 3 hours to eat breakfast, pack up our belongings and shove it all into our kayaks. Our personal stuff and a bunch of group gear goes in each kayak, with big pots and pans in the middle of the doubles and most of our personal gear and shared food in the singles.

We paddle all morning in sunny, glossy water, drifting through heaven.

I paddle with our guide Devjeet and learn the spirit name given to him in grade 5 is the mirror of mine: Sun Eagle Man (mine is Golden Eagle Spirit Woman). As he reveals this, a massive eagle feather floats on the water between our kayaks. I know I’m a hippie and I see meaning in everything but COME ON. 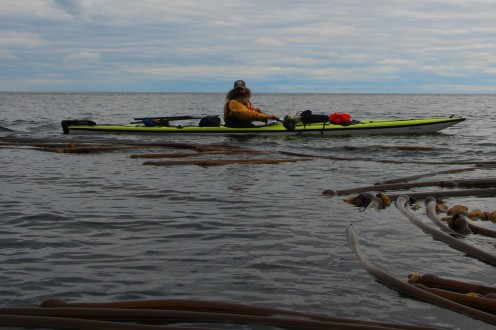 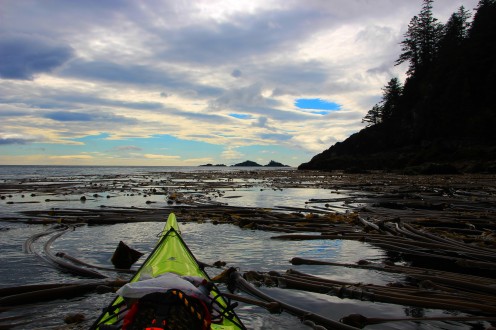 The German siblings make us lunch of hummus and fresh vegetables before we face the windy crossing to our camp spot. Our other guide Amy patiently answers my endless questions about tides, weather, birds, seastars…

When she’s not distracted by elusive seal sightings, our Swiss friend prepares us an extravagant “Morroccan feast” for dinner, tangier with swiss cheese, chocolate and wine. On our trip, the guides prepare breakfast and some lunches, and the participants fund and prepare all the rest of the meals, reducing costs and promoting a shared culture with the group. This translates to unreal food as no participant wants to let down their tripmates, and so works to outdo all the other meals on the trip. 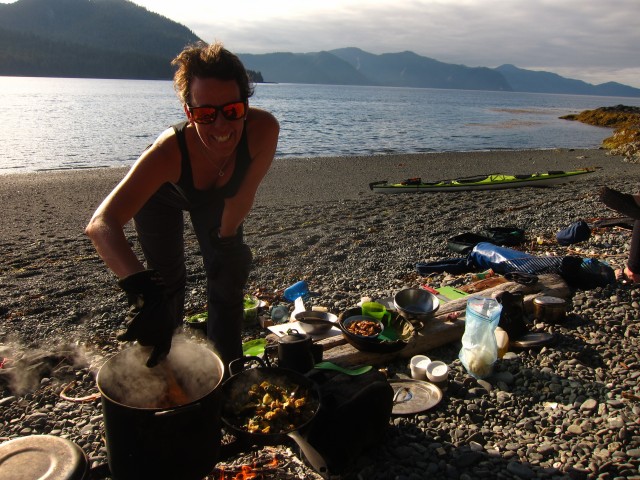 Since we didn’t visit a Haida site today, you get instead: a geological history lesson

Haida Gwaii is literally on the border between worlds: heading west from mainland North America, you cross the shockingly shallow Hecate Strait (usually not more than 60 metres deep), travel the 80 km wide islands, and then hit the dropoff: if you rode a whale straight down off the immediate coast of Haida Gwaii (which even in fantasy is both exciting and terrifying), you would see 5km of North America’s continental shelf, then plunge 2.5km straight down to the ocean floor.

In Classical Haida, the name of this place was “Xhaaydla Gwaayaay” – Islands on the Boundary Between Worlds.

The dropoff, really a deep trench off the west coast called the Queen Charlotte Fault, is a massive crack in the crust of the earth where the Pacific Plate rams into North America. Like a head-on car crash in epicly slow motion, the Pacific Plate races northward at 50-60 millimetres per year, rippling the land of North America like the crippled hood of an impacted car, lifting mountains, folding and compressing the plains into hills and, sometimes, causing the entire place to shake. Haida Gwaii has more earthquakes than any other place in Canada, and is close to the top of the global list as well. It’s actually a “triple junction” – the collision of three tectonic plates: The Pacific Plate, the North American Plate, and the Explorer Plate. The geological name for a place like this is a “Transform Boundary”.

200 million years ago, North America ended at the BC/Alberta border – close to where my home Calgary is now (though it would be unrecognizable). As the continental plate drifted west, it gathered other pieces of the earth’s crust, including the Gulf Islands, Vancouver Island, and all the islands of Haida Gwaii. These islands all used to be near South America, originating in volcanic explosions in the Pacific Ocean off Peru.

(We know that because of the 230 million year old green basalt cliffs. I always see these and think MAN THAT LOOKS LIKE GOOD ROCK CLIMBING, but apparently geologists see it and think WOAH THIS PLACE IS SO OLD AND TROPICAL IN ORIGIN). 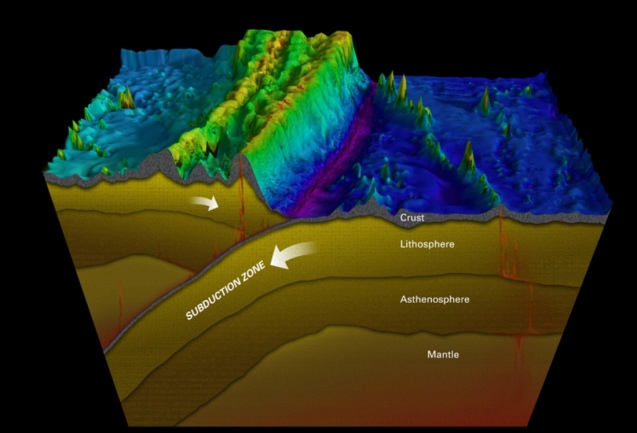 Ancient glaciers carved up the land like I carve gelato with my spoon: mountains, round hills, steep valleys, epic fjords, sand beaches and pebbly debris all give away the history of glaciation. The Hecate Strait is shallow because the pressure of the glacier above it rose the level of the land, like sucking a milkshake up a straw. The waxing and waning ice caused rising and falling water levels with differences up to 150 metres (!!!!!!). This process is recorded both in the rocks and in the oral history of the Haida people.

Oral stories and archaeological evidence tell of villages hugging the shoreline as it rose and fell, retreating into high caves at the peak of the water level and descending back to the low shores. The weight of the ice pushed the islands down, raising the sea level, then melting ice continued to raise the water until the weight equalized enough to raise the islands back up. This colossal seesaw recorded in hundreds of distinct Haida myths and stories.

I sit on the beach at sunset, thinking of the mathematical precision and patience that created this place, that lifted the waters, carved the valleys, ground down the pebbles I sit on. 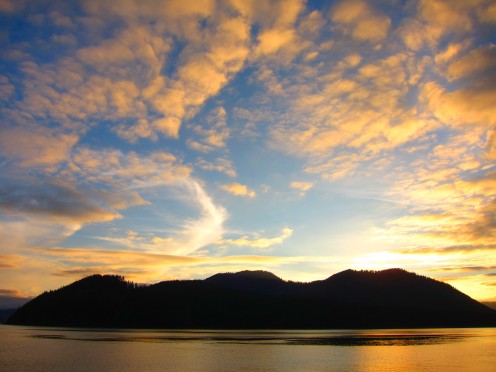 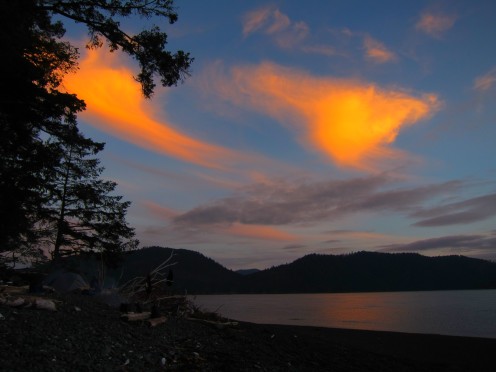 I watch the sun set, then walk back to my campsite. A previous explorer made a Christmas tree out of found shells, and an eagle left a gift in front of my tent. 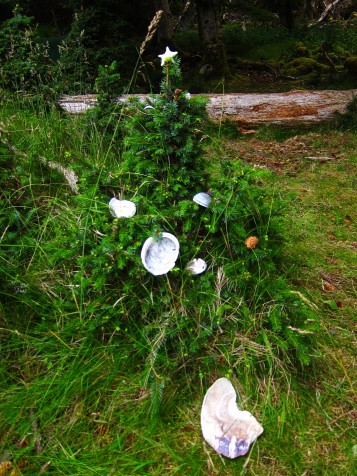 I struggle to fall asleep to the sound of lapping waves, trying to calm my mind of all the wonder I experienced today. 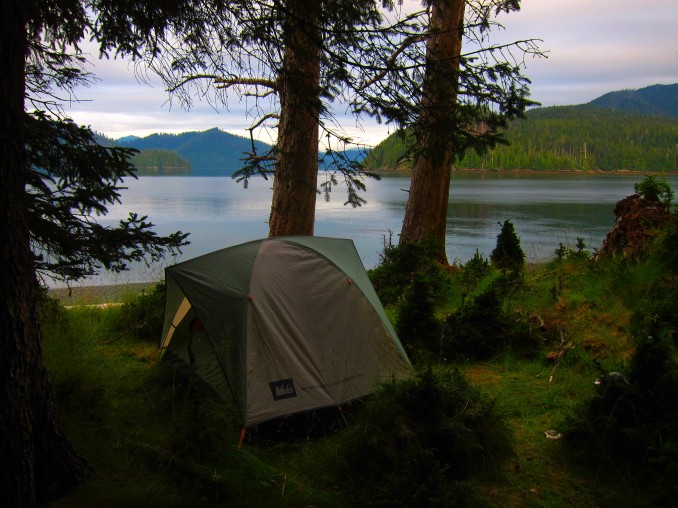